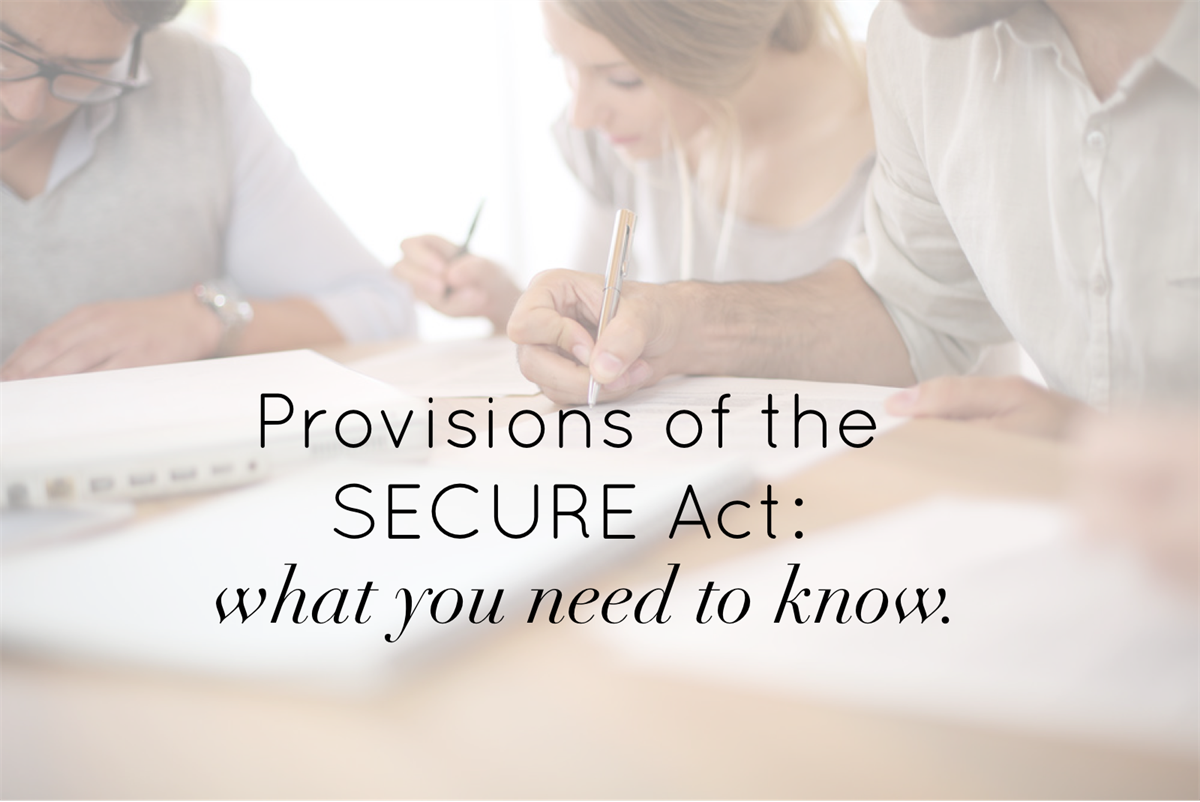 The SECURE Act: What you need to know

You won’t be surprised to learn that the SECURE Act is over 20,000 words long. While there isn’t room to cover every provision of the law here, what follows is a brief overview of the major changes that could affect your finances.

For years, one of the most popular estate planning strategies was the use of Stretch IRAs. When a parent or grandparent dies, they can leave their IRA to their children, grandchildren, or other heirs. Under the old rules, these beneficiaries could take distributions from their inherited IRA based on their official life expectancy. This allowed them to “stretch out” the value of the IRA – and the tax advantages that come with it – for a longer period. For example, if a 50-year old with a life expectancy of 85 inherited her mother’s IRA, she could stretch out her distributions over the next 35 years.

Now, non-spousal beneficiaries who inherit an IRA in 2020 or beyond can no longer do this. Instead, inherited IRAs fall under the new “10-Year Rule”. This means that all the money in the IRA mustbe withdrawn by the end of the tenthyear following the year of inheritance. At that point, the beneficiary must pay taxes on that money.

Also, the new 10-Year Rule does not apply to spouses, disabled and chronically ill beneficiaries, and minors. For the last group, the exception lasts until the child reaches the “age of majority”, which is 18 to 21 depending on the state. Once they reach that age, the 10-Year Rule kicks in. Make no mistake, this new rule will have a profound impact on beneficiaries, especially those who are younger and could otherwise our retirement savings.

Another change the bill makes is to lengthen the time people can contribute to their IRAs. Currently, retirees can only contribute to an IRA up to age 70 1⁄2. Once they hit this milestone, they are required to begin making withdrawals. (These are called required minimum distributions, or RMDs.) Under the SECURE Act, that age would increase to 72. That means retirees have an additional 18 months to benefit from the tax advantages that come with IRAs.

Under the old rules, contributions to a traditional IRA were prohibited once a person reached the year they turned 70 1⁄2. No longer. Now, anyone, even those older than 701⁄2, can keep contributing to their IRA so long as they continue to work and have earned income.

Here's an example. Jane turns 70 1⁄2 in 2020 but decides she wants to continue working. So rather than withdraw money from her IRA, she decides to make a tax-deductible contribution to it instead. While Jane must still take RMDs once she turns 72, she decides to keep making contributions every year until she actually retires, as the math still works in her favor.

Obviously, this change only benefits those who continue working into their seventies. And even then, it may not always make sense to keep contributing to your IRA. But it’s always nice to have options!

Another change is for new parents. Under current law, a person must be 59 1⁄2 years old to make withdrawals from a traditional IRA. If they withdraw money earlier than that, they must pay a penalty of 10% on the amount you took out. There are a few exceptions, such as if they need the money to pay large medical bills, buy a home, or manage a disability. But, generally speaking, the government wants the money inside a retirement account to be saved for retirement.

Under the SECURE Act, new parents can now withdraw funds penalty-free to help cover birth and adoption expenses. This is especially helpful for younger parents who have high deductible insurance plans. There is a $5,000 cap on withdrawals, though, and they need to be made within one year of the birth or adoption.

The SECURE Act brings many changes to 401(k)s, but most are for businesses to worry about. There is one change you should know about, though, and it involves annuities. A type of insurance product, many annuities offer a monthly stream of income, sometimes for life. This can make them attractive for retirees. Historically, few 401(k)s contained annuities. The SECURE Act makes it easier for employers to offer this as an option.

Choosing the right annuity can be difficult, as there are many types and features, and some annuities come with high costs. So, while an annuity may be right for some people, that doesn’t necessarily mean it’s right for you.

CHANGES 529 PLANS2
For many Americans, paying off student loans is a difficult financial burden. To help pay for their loved ones’ higher education, some parents and grandparents use 529 plans. Any funds invested in a 529 plan can be used to help pay for college expenses, like room and board or tuition. The best part is that the funds are exempt from federal taxes, and often state taxes, too, so long as they’re used solely for education expenses.

Under the SECURE Act, parents with 529 plans can make a tax-free withdrawal of up to $10,000 to help pay off their child’s student loans. This $10,000 limit is per person, not per plan, which means another $10,000 can be withdrawn to help pay the student debt for each of a 529 plan beneficiary’s siblings.

As you can see, the SECURE Act contains many provisions for those saving for retirement. Of course, my team is pouring over these changes, and we are happy to discuss them with you.